Colorectal cancer is the third most common type of cancer in both men and women and is the second leading cause of cancer death after lung cancer. Many colorectal cancers can be prevented through regular screening. Screening can find precancerous polyps— abnormal growths in the colon or rectum—so that they can be removed before they turn into cancer. Several screening tests have been developed to help doctors find colorectal cancer early, when it may be more treatable. We know that detecting colorectal cancer at an early stage improves survival rates.  The five year survival rate for people diagnosed with early stage colon cancer ranges from 53% to 92%, compared to only 11% for persons diagnosed with metastatic Stage IV colon cancer. While colon cancer occurs most often in people over the age of 50, there is an increasing incidence rate in younger individuals.

In average-risk people with no symptoms, doctors recommend regular screening tests for colon cancer starting at age 45. Screening should continue through age 75 for people who are in good health with at least a ten-year life expectancy, and people between 75-85 should discuss with their doctors whether screening is still necessary. People 85 and older should no longer get screened.  Because more people are getting screened for colon cancer, we’re detecting the disease earlier and more often. As many as 90 percent of patients live five years or more after treatment if the cancer is found and removed at an early stage. Routine colonoscopies can find colon cancer in its early stages. This screening procedure allows your doctor to carefully examine your colon for signs of polyps (abnormal growths on the inside surface of the colon).

Any of the following symptoms should be checked out by your doctor. Although they occur in people who have colorectal cancer, they can also be caused by a number of other treatable conditions.

Types of Screening for Colorectal Cancer 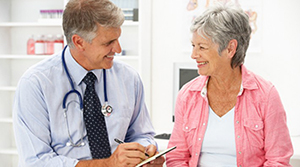